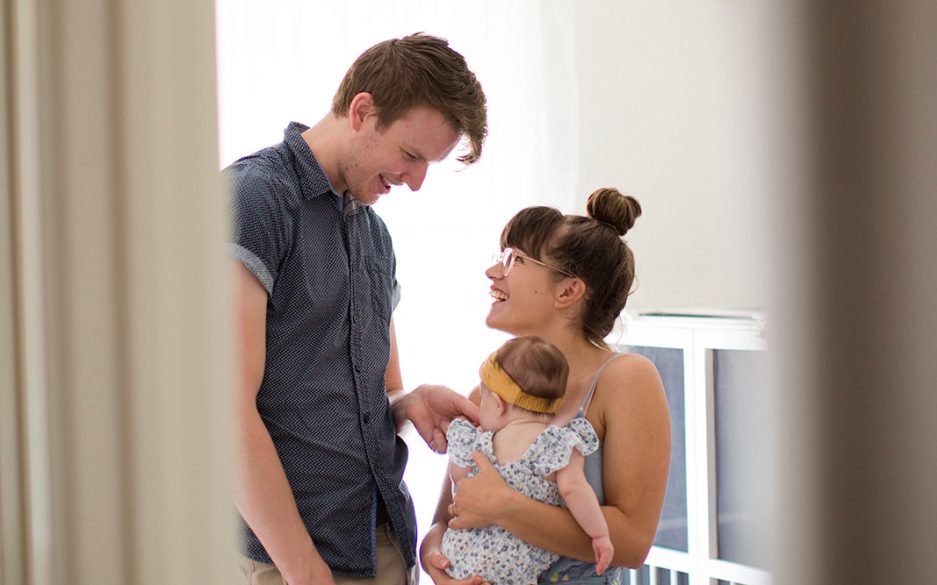 It’s been almost one whole month since John asked me to marry him! Time has really flown. We’ve been swept up in a wave of incredible joy, blessing, excitement and busyness as we plan our wedding and start to set up our lives together.

The first few days of our engagement were a whirl and I explained our engagement story in many different long and short variants. Here, I will tell it in full for those who never got to hear it or only heard the main points. 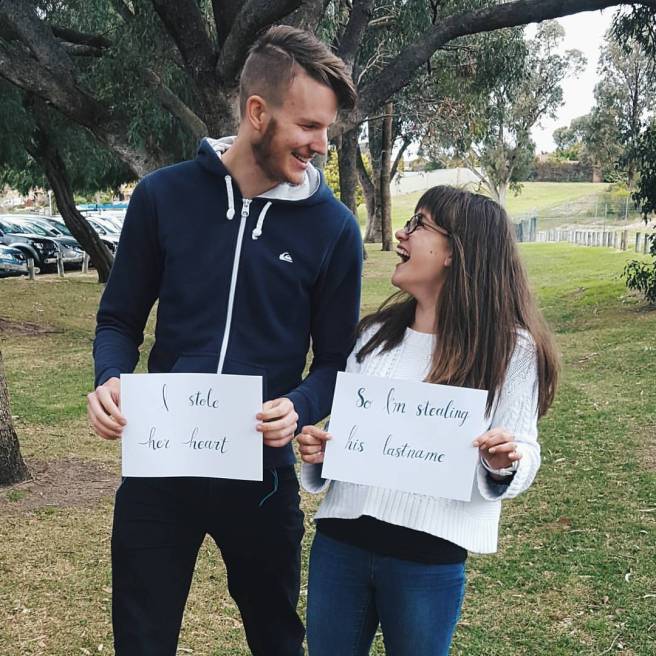 About a month and a half before, John asked if i would like to go on a date some time the next month where we could film parts of the date and create a vlog from it. I was a little bit suspicious of this and thought it sounded out of the ordinary, but at the same time he had just come back from Vidcon and had talked about doing a vlog for some time so I tried not to get ahead of myself.

August came and went and we never went on the date. When I brought it up John feigned having forgotten and asked if i still even wanted to do it. I was a bit disappointed by that but let him know that yes, i did indeed want to go on a special date. (This was all part of an elaborate plan that would make me think the date was more my idea).

During the week of, John told me he was going to buy a new suit for our date and encouraged me to also get a new dress. I went shopping with Lauren and bought something a couple of nights before and we talked about our suspicions and excitement about this date, all the while trying to make sure I didn’t get my hopes up. On the day dear Susan came around to do my hair and make up beforehand. I’m lousy at doing both of these and wanted to look a little nicer than just diverting to the messy bun. 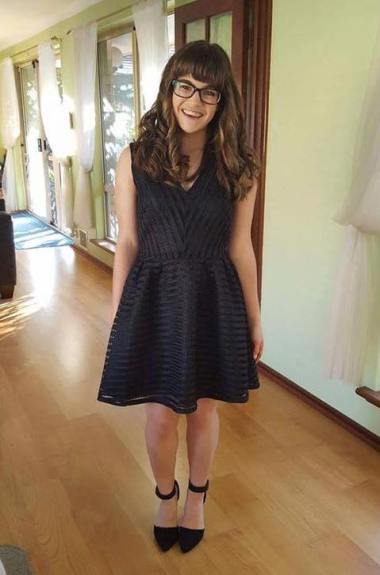 John came to my door and picked me up just like he did for our very first date and looked very handsome in his navy blue suit with brown shoes and bright red socks (which he knew i would appreciate). He brought me a huge bouquet of flowers as well! 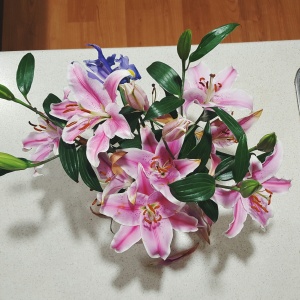 He drove us to a surprise dinner at Friends restaurant in the city. We were given the perfect table sitting right in front of the window overlooking the Swan River. We enjoyed an amazing five course meal and were devastated that we both couldn’t come close to finishing our dessert.

Towards the end of the meal, I said I might order a cup of tea with dessert, to which John said he had thought that maybe we could go next door to the Hyatt to have tea, but then added that I could have one in the restaurant instead if i wanted. I said we would stick with what he had in mind, but it did make me think i must be wrong about the date and he didn’t actually have a particular plan. 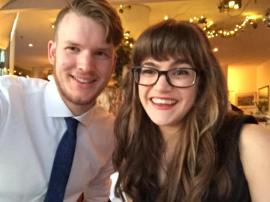 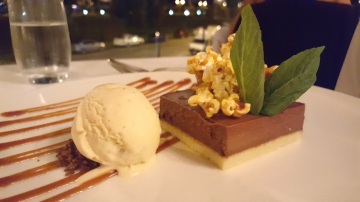 The restaurant gave me a flower as we left and went next door to the Hyatt conservatory for tea. As we often do on dates we talked a bit about marriage and the future, and John said he promised to make a decision about us before we got to four years of dating as he knew he needed to make one soon. I got quite sad at that point, realising that I was obviously all wrong. (Later that night John told me that he said it because he felt i was getting too close to guessing, but tried to change the topic when he saw how it affected me).

After leaving the conservatory John suggested a walk around Elizabeth Quay if i felt up to it, but that maybe I would like to go home as it was getting on in the evening and we were both still recovering from colds. At this point i was fairly convinced he couldn’t have anything planned since so much of the date seemed to be my prerogative. We did end up going on a little walk about the Quay and John set up his camera on a step to film us hugging in front of the changing lights. Something in his personality changed during that moment and he held me for a long time (he later told me he was tempted to propose then but decided to stick to the plan and not do something “so cliche”).

After this lovely evening of talking, eating and enjoying being with one another we drove  back to mine. John walked me to my door (as he does every time he takes me home) and said goodnight. As he hugged me goodbye he said in my ear “just a little bit longer”. It made me smile, knowing that he was thinking about our future and that maybe he had intentions to propose in a few more months (little did i know it was more like a few minutes). 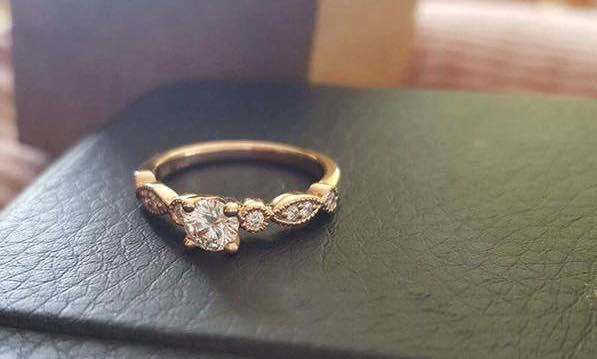 I went inside and said hello to my parents (who knew and were wondering what on earth happened). I told them about each course of our dinner and went to get ready for bed when John texted me to ask if i had changed yet. He said he lost some of the footage we had filmed and asked if he could come back to redo it.

We walked to a nearby park with his camera and as we entered the park I saw all these candles lighting up the ground and could eventually make out his keyboard with fairylights. I was so confused and happy and completely overwhelmed. In my mind our date was done, so what was happening now!?

He stood behind the keyboard and played the beautiful piano piece he wrote me when we first started dating. I was gone. I completely burst into tears. John said he couldn’t finish the rest of the song as he wanted to come and grab me. He took me around the side of the piano, held me close and said a whole lot of lovely things.

Then he took out a ring box and got on one knee and i couldn’t believe what was happening. Still writing it it feels surreal, but wonderful. More crying followed until i had to take off my glasses because i couldn’t see a thing! 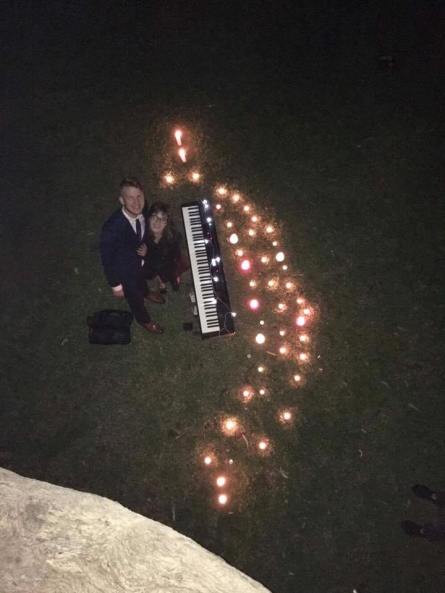 John asked me to marry him in the same park where I embarrassed myself two and a half years ago by telling him i already knew i wanted to marry him.

All through the date i kept asking what was going to be the end of our vlog as just the date alone didn’t seem like a very good story. Well this was by far the most perfect ending. John set up the camera before he played the song and filmed the whole proposal.

God has blessed me with a love story better than what I could have ever been praying for.