The idea behind a stop in Dubai was to give us a more chilled journey from Australia to Europe post the wedding madness. However, as good as it was to crash on a horizontal bed for one night I’m still unsure if a few hours layover was worth it, especially as we were setting the alarm for another extremely early morning flight!

If nothing else it was the opportunity I had wanted to set foot outside of the airport this time and experience a culture so different from our own. 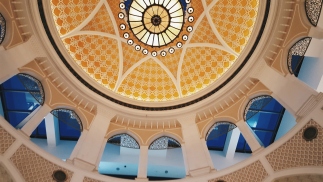 Well, I didn’t have to leave the airport to get my first taste of that. What was to become quite the hassle during our European travels began on day one as my 20kg suitcase slid round the conveyor belt of baggage collection with a very obvious defect. Yes Emirates, thanks for the missing wheel from the get go.

I’m not the sort of person to let these things just slide so I marched right up to the baggage service desk to let them know about the damage. While waiting in line two men appeared alongside me also needing assistance. When the woman had finished with the man in front these men proceeded to move towards the counter first. I was overtired, over-traveled and not in the mood so I also edged forward making sure they were very aware I was there first. I got next to no acknowledgement, and if it wasn’t for the woman at the desk who had noticed me I would have easily been pushed aside. Even when she explained I was next they were not willing to concede.

It was an extremely unsettling feeling to be treated this way by other adults. This was not to be my only experience of this either. On our return home I also found myself pushed to the side at checkouts by other men and downright ignored. It was an eye opening experience to the local culture. At the time I was so tired, so sick of traveling that I found it too much and returned to John in tears. It really got me thinking about how crippling the restrictions placed on women in these parts of the world could feel. I’ve been so blessed to live in a country when in my eyes I’m treated as an equal to men and it’s not something I’ve ever had to think about.

All that being said, Dubai is a magnificent place. I have never seen anything like it. Driving through felt like being in a futuristic city with road bridges high above the traffic, looping over everywhere. After spending some time in our hotel, and doing our best to not give in to the desire to sleep, we set foot outside into pleasantly mild weather and a bustling city.

We were staying in downtown Dubai with a view over a construction site, but handy proximity to the world’s largest shopping centre.

We didn’t much feel in the mood for shopping but we didn’t need to do that here. We were thoroughly entertained for ages with the 10 million litre aquarium and we didn’t even pay to enter the exhibit!

The shopping centre also has an indoor ice rink, countless levels of stores, a more cultural marketplace and an outdoor dining precinct where we watched a light, fountain show while enjoying our greasy Five Guys’ burgers.

We caught up with some of my family while over here too, which was a great opportunity.

After an all-too brief night’s sleep we were up bright an early for our next flight to Paris!